Last winter’s rains were wonderful and sorely needed. But it was easy to forget that they were about average. News coverage focused on Northern California’s record rains and the drama at Oroville Dam. But for those of us in Ventura and Santa Barbara Counties, the drought didn’t go away… it just paused. Groundwater and lake levels are not much different than a year ago. Soil salinity is inching back up. We had was a nice break, but break time’s over. The drought is back; indeed it never left.

The odds of a reprieve this year seem slim. As I write this on December 4 we see no rainfall ahead; only a week of howling Santa Ana winds and single digit humidity. It is probable that we will see no measurable rainfall until after New Year’s Day. My estimate is that we are going to be short 10 inches of rainfall for the season.

I’d love to think this pessimism is misplaced. I look forward to spreading this winter’s covercrop so we can make the best possible use of the whatever rainfall we get. I hope we will have the chance to take our well offline for some badly needed maintenance, but we need a good rain event to allow a break in our irrigation schedule. We shall see.

Last Thursday we were fortunate to have a very nice rain, 1.3″ that fell steadily over night. Now it’s Monday, and I’m already considering my next irrigation. Why? This graph holds the answer. 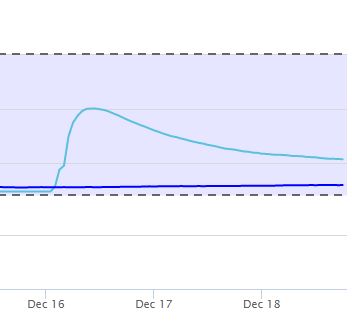 What we’re seeing here is that prior to last week’s rain we were quite dry… very close to the lower acceptable limit. We were ready to irrigate had the storm failed to deliver. Thankfully it delivered in line with expectations. Where are we now?

The rain had the clearest impact at 12″ (light blue), which is as you would expect, but it was insufficient to fully saturate the soil. At 36″ (dark blue), the rain barely registered at all. Shallow soil moisture has already dropped considerably as the rainwater wicks through the soil.

Hoping the rain forecast for next Monday turns up!

(Hat tip to our technology providers at Acuity Agriculture for a great tool!)

Theories are great, but to be meaningful, they must be put to the test. For a little over ten years, we’ve been working on improving our soil quality. There are many potential benefits, but our capacity to weather the drought motivated our efforts. During the past few years of drought, I’ve tried to calculate our additional water holding capacity. Depending on what numbers I used, my estimates have ranged from 2.6 to 3.9 million additional gallons of water that could be retained in our soil. But so far, these numbers have only been theoretical. How much more could we really absorb? That remained to be seen. 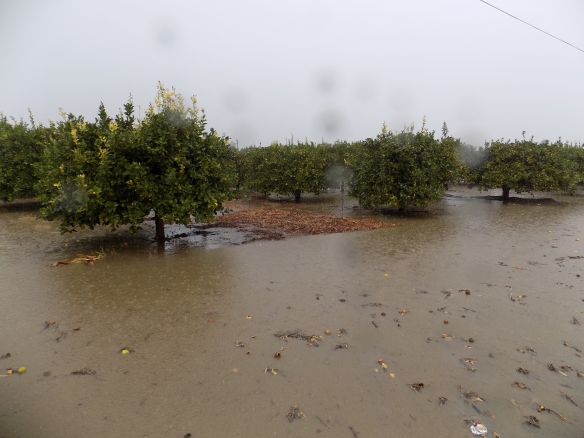 This week’s El Niño powered storms gave us a chance to gather more data. There is a low point on our property that floods predictably after 1.5 inches of rain. Yesterday, it did flood. But not until nearly 4 inches had fallen in the previous day and a half. It seems we are retaining more water.

How much more? It appears that we absorbed at least 2 more inches of rain before flooding started. Time for math.

This is a fairly crude “back-of-the-envelope” calculation, but it falls very neatly within the predicted range. Not PhD level science perhaps, but a nice confirmation that our work has been worthwhile.

If the “Keep Calm and _______ ” meme hadn’t already been massively overplayed, this would have been the one time that I would have used it. Do you find yourself worried about the latest predictions of the coming avocado famine?

Many of you may recall Chipotle’s “Gaucapocalypse Now” scare from last year. It was just the latest in the time honored tradition of avocado obituaries. Avocados have always been rumored to be on the brink of extinction. Pests. Drought. Diet fads. Root rot. Every recent decade has had it’s own panic for it’s own reasons. Yet Americans enjoy more today than ever, and that won’t change any time soon.

800 young avocado trees are replacing lemons at our ranch in Saticoy. More are planned.

Adam Sternbergh’s article in GrubStreet is actually pretty good. It is a detailed look at the very real challenges faced by some California avocado growers and the steps they are taking to deal with those challenges. But the attention grabbing headline only makes sense if you ignore the bigger picture. Yes, San Diego and Riverside area growers are in a real bind. I have friends down there and it really does suck (to be blunt.)

But along California’s Central Coast, including Ventura, Santa Barbara, and San Luis Obispo Counties, the water picture is much better. (Not perfect, of course… this is 2015 California.) Newer orchards with younger trees are producing well. Better management techniques are evolving and new rootstocks are being developed. While total avocado acreage in the state may well decrease a bit, total production isn’t expected to follow it down. Avocados have always been prone to alternating light and heavy crops. This will continue and cause occasional price fluctuations, just as it always has.

But have you had your last California avocado? Only if you don’t want another.

And who’d believe that?

If you accept the premise that California is a desert, it will inevitably follow that little to no food should be grown here. Common sense dictates that agriculture does not belong in a place with no water.

But California is not a desert. It includes desert, but it includes other areas as well, including areas that traditionally have an abundance of water. It includes regions that are self-sufficient in water, even if that water is precious. Any discussion of the drought that proceeds from the premise that “California is a desert” is not sufficiently grounded in the realities of California.

Our state is a large one with a tremendous mix of agricultural crops, water resources, and local climates. As the current crisis has made clear, aligning our crops with the necessary water and amenable microclimates is a work in progress… just as aligning water use with lifestyle, landscaping, and recreation is unfinished business in our cities.

But please… let’s be clear that most regions of this state, particularly the areas most important for both housing and agriculture, are not in the desert.

California’s drought has been a popular topic in the news recently, and rightly so. But it has been disappointing to see so much coverage that looks at just one part of the state (usually the Central Valley) and makes generalizations about California, water policy and agriculture as a whole. Over and over again, I see them try to describe the state as a monolith, when the reality is that the issues surrounding the drought are quite different in different parts of the state.

California’s farm economy is the largest in the nation, but really it is a composite of several farm economies which vary in many ways… most notably in terms of crop mix and water source. Any breakdown of these regions is going to be somewhat arbitrary and subjective, but please allow me to nominate eight agricultural sub-states.

The nominees are: (drumroll)

The Desert: Centered around Imperial County, the Desert is a big supplier of winter time veggies, fed with Colorado River water.

The Southland: San Diego, Orange, and Riverside counties are supplied with water from multiple directions, but the costs can be staggering.

The Central Coast: Ventura, SLO and Monterey counties produce veggies, greens, berries, citrus and avocados, as well as some pretty nice wines. The region is largely self sufficient in terms of water, but supplies can be tenuous.

The Wine Country: Napa and Sonoma are dominated by the wine industry, making them a unique casein terms of water use and economics.

Baja Oregon: This area has more than just timber and recreational herbiculture…it is also the wettest part of the state, but remains vulnerable to drought due to minimal water storage.

The Wet Central Valley: From the Sacramento Delta north, this region is a key water exporter… a distinction not always cherished by its residents.

The Dry Central Valley: The most productive region in the nation… so long as it has the water.

The Sierras: More dryland farming here than elsewhere in the state. Why? Because I am including the Owens Valley, whose water goes to Los Angeles.

My thumbnail sketches of the 8 Californias are crude, probably even overly simplistic. Some readers may take issue with them. Some may draw the boundaries differently. Some may see 6 regions, or even 12. Fair enough… I welcome any discussion. But even this simple framework is a much more “fine-grained” look at California agriculture than is usually being offered for discussion about the very real crisis this state faces.

We can be at least this detailed, can’t we?

The traditional benchmark for water use in citrus and avocados is 2 acre-feet of water per acre per year. In a dry year, you expect the number to go up, and as we all know, 2014 was a very dry year. After completing my pumping reports for the United Water Conservation District this morning, I’m pleased to say that our usage at Petty Ranch was only 1.65 acre feet per acre… a great number for such a dry year, and about 15% less than I expected earlier in the year.

How did we do it? Most of the credit goes to my Dad, who had the foresight to move us to a microsprinkler irrigation system a little more than 20 years ago.

Our four acres of figs can make due with less water, and their irrigation was cut back a bit in October. These trees are still young, and this is the first time we risked stressing them, but I think we will be able to support them with less water in the future.

Covercrops played a role. Our soil structure has improved dramatically, which helps to absorb and retain water.

Despite the drought, we’ve replaced some of our older trees with new plantings. At least for a few years, they will be able to get by with less water than their predecessors.

So that’s it… nothing fancy, and frankly nothing more than is being done by many careful farmers in our neighborhood.

SaticoyRoots Weblog
Create a free website or blog at WordPress.com.